A new gem has taken its place in the architectural playground that is Salford Quays in Manchester. Between the towers of MediaCityUK and Michael Wilford’s The Lowry, sits a small but perfectly formed gold parcel – a new home for The Alchemist, an innovative cocktail bar and restaurant which will open at the end of August 2017.

We spoke to its architect, Marion Room of Reid Architects and Paul Smith, MD of Longworth whose team installed the stunning folded gold roof and walls.

The Evolution of a gem

The bund is a transitional space where pedestrians cross between Media City and the Lowry. MediaCityUK developers Peel Land and Property Group commissioned Reid Architects to create a design icon that would be a beacon linking both sites and provide an oasis for walkers between the two.

Reid Architects started discussions with the planners before there was an anchor tenant. “It was clear we would need to maintain several significant views across the site, and that the roof would be as important as the walls because so many people look down on it,” said Marion Room. The building is therefore all elevation, with a roadside main entrance and a cantilevered terrace looking out over the Manchester Ship Canal.

The team at Reid Architects began experimenting with cutting away the geometry in plan, but to address all the site constraints the design ‘became a wrapped object, like a piece of origami’. The service yard is tucked away under a folded end with a fire escape, and there are very few penetrations through the envelope – plant is housed in the ceiling and louvres at each end under overhanging eaves mask all the services.

It was at this point that Longworth and SIG Zinc & Copper became involved. Paul Smith describes their first encounter with the building as ‘a folded piece of cardboard’, which might seem daunting, but early involvement is always an advantage. “The sooner we are involved in a project, the more time and money we can save the client,” he says.

“This is technically one of the most difficult schemes the team have worked on,” says Smith. “From a concept perspective, the building shouldn’t be clad in zinc – we largely rewrote the rule book on what you can do with this project.”

The roof has multiple falls against each other at low pitch, which would be too shallow to form an effective valley gutter, and water would be trapped behind the standing seams. Longworth established a set of falls that would meet the design intent, but also allow water to evacuate quickly. This included creating slopes which pitched in two directions, which they tested with a bucket of coloured water – “just to be sure it would work,” explains Smith. 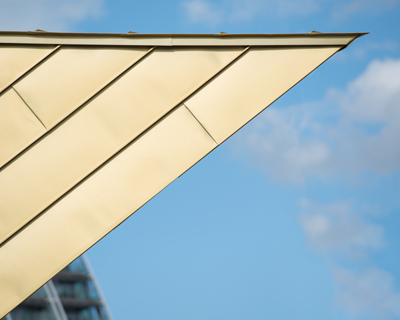 The choice of metal cladding exactly suited the precise geometry of the building form, and zinc on all surfaces hit the brief for visual quality for all angles – including the roof. The team explored colours other than traditional grey, to enhance the beacon qualities required, but when Living Ventures (owners of the brand) saw the gold version, it fixed immediately as the right choice. What could be more appropriate for Alchemy than gold?

The finished building is clad in elZinc Rainbow Gold Protect over an Admaster composite panel which provides both insulation and acoustic attenuation – quite important for a bar in a mixed-use area. Longworth designed the deck with a thicker Admaster panel to ensure the design met the sound attenuation requirements of the project.  Zinc in the roof areas is 0.7mm and 0.8mm on the walls. The standing seams are at 430mm centres which allowed no waste from a 1m wide roll of the product.

Reid Architects originally specified KME Tecu Gold as the cladding, a copper alloy also supplied by SIG Zinc & Copper. The choice of elZinc Rainbow Gold Protect was made as the design team understood that the material will remain stable and won’t weather as heavily as the alternatives and would be best suited for this project on this site.

Paul Smith adds that the colour range of elZinc rainbow is superb, represents a significant cost saving on copper but also has a good lifespan. “The main advantage of this product is that the colour is not an artificial coating, it’s a pigment in the zinc itself – a natural colour. In terms of longevity not only will it last 30-40 years and won’t degrade, it doesn’t suffer UV attack and will continue to oxidise gradually, like a natural zinc product.”

Smith also praised the involvement of Simon Walker and the team at SIG Zinc & Copper who supplied the elZinc, composite panel, fixings and membranes and issued a system warrantee for the complete roof build up. “Simon was heavily involved in working with the architect to ensure the system warrantee met the client’s requirements,” he said, “giving confidence that the lasting appearance of the material could be assured.”

Zinc also has other benefits for this project. Room explains that because the roof cantilevers out over the canal, zinc’s zero maintenance qualities are ideal. “We’ve designed all the water to fall back to the pavement side, outside the thermal envelope, with telltale drips in the overhanging eaves. This allows maintenance almost entirely from ground level – a very good Health & Safety solution”.

Installation of the zinc roof and walls

elZinc Rainbow is a good product to work with, says Smith. “It’s a very malleable zinc and doesn’t split or mark particularly easily.”  Architect Marion Room was very impressed with the installation process.

Longworth brought a gang of installers down from Glasgow and they mocked up key junctions and seams for approval. “The same gang worked on the whole project all the way through,” Room explains, “They had a consistent working style which is their signature – almost like a handwriting style”. This ensured the detailing was executed perfectly and consistently across the roof
and walls.

Room has some tips for those interested in using zinc on their projects. “We are really happy with aesthetic and technical aspects of it, You need a good working relationship with the team on site, and have to have clear design intent. It is vital that there is a shared vision for the design to be successfully realized.”

Smith also recommends early involvement. “Get us involved as early as possible – the sooner the team is involved, the more advice, help and assistance we can bring. In every instance, we have been able to save the client money and time. We can help redesign not just the zinc but the whole construction to get the best results – but can only do this if we’re involved early enough.” Involving specialist contractors and suppliers early really does make sense.

The consistency of colour and the location in a wide-open space gives the Alchemist a unique brand execution in the building they are going to occupy. MediaCityUK managing director Stephen Wild told Insider Media, “It’s a statement building, it might be small but it’s perfectly formed. We live in the age of Instagram. People like sharing experiences, a gold-wrapped building could do very well on Instagram.”

But it isn’t just the tenant who loves the building. Members of the public and TV workers were tweeting photographs as the gold was revealed in all its glory. “We are looking forward to visiting the building once it is fully occupied at the end of August”, said Room.

As for Smith, he and Team Longworth are very happy with the elZinc Rainbow Gold. “We’re looking forward to working with it again soon, and have put it forward to a client as an option on three or four jobs since already, including a couple of very large schemes.”