Zinc Shingles on the Amphibious House

One of the most innovative private houses to be completed recently in the UK is this amphibious house, featured twice on Channel 4’s Grand Designs. We spoke to Robert Barker of Baca Architects about how the project came about, and why they chose to use zinc shingles to clad it.

Baca Architects were approached by the new owners of a very compact three-bed house on a fantastic island site on the Thames in Buckinghamshire. The site suffers from very high risk of flooding – predicted by the Environment Agency to be up to two metres of floodwater once in 100 years, Robert Barker explained. To produce a successful replacement house, the architects must first find a solution to the flood risk issue, and Baca looked at a number of their practice principle, ‘build to reduce flood risk’.

Firstly they considered an elevated building – raised above the flood level. Given the height of the water level change, the house would have to be raised over 2m. As the building is in a conservation area, the allowable ridge height would have reduced the amount of available accommodation to a tiny single storey building raised high up in the air.

Secondly Baca looked at the option of a flood resistant or resilient building – one that would prevent floodwater entering. But given the height of water predicted, the waterproof structure would have to be huge, and the water pressure would also give the resultant building a tendency
to float.

Finally the practice proposed something rather special – not a building above the flood, nor one that resisted the flood, but rather a building that would rise and fall with the flood water – i.e. an ‘Amphibious House’.

How the Amphibious House Works

Baca developed the amphibious house concept in Holland; this would be the first time such a house was constructed in the UK. For most of its life the house sits in the ground as normal, but if the water level rises, the house rises with it. The house responds to the actual flood volume rather than an extreme incident, ideal for an island site in a tidal river.

Baca worked with hydraulics engineer HR Wallingford and structural engineer Techniker to design the structure that sits like a boat in a ‘wet dock’ and only floats when the floodwater rises sufficiently to threaten the accommodation. As the house rises, it is kept in position by four steel ‘dolphins’ guiding the concrete hull up and down. Below, the amphibious house leaves a space in the dock for flood water to enter, thereby increasing the flood storage of the site. For most of its life the house appears quite conventional, with a ridge height comparable with neighbouring properties. The house is also able to remain in contact with the garden, making the most of the spectacular environs.

The amphibious approach had a significant benefit in terms of useable space, replacing a 90m2 house with a 225m2 one, with no change in footprint and within the conservation area constraints. The interior design then makes the most of the view with a double height space looking out through full height glazed façade at the river.

Cladding sub-contractor Kingsley Group, which installed the shingles, advised that instead of alternate rows being offset at panel midpoints, they should run a third of the way along the panels to avoid an obvious ‘zig zag’ effect along the facade. ECE Architecture had originally thought to fold the shingles around the corners but, says Kelly, it was decided to run a folded section of the zinc along the edges to create a crisper line that would otherwise be achieved by folding it – a detail also used on the parapet. 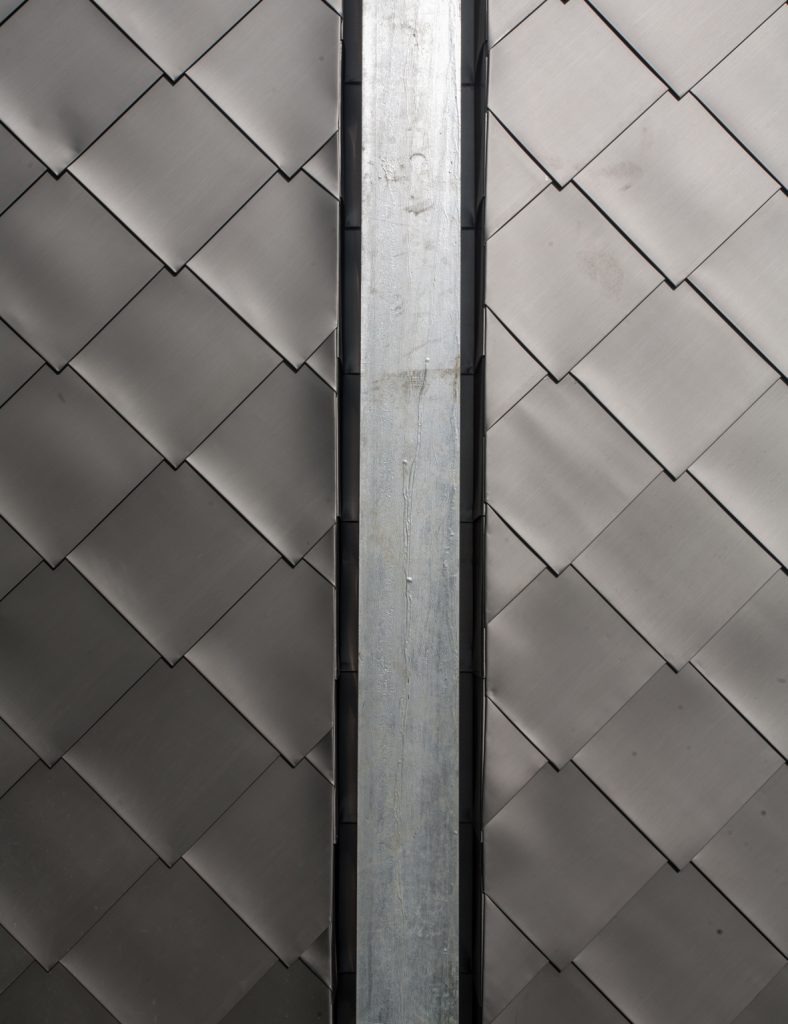 Why use Zinc, and why Shingles?

Baca were very keen on using a metal façade for the Amphibious House. Buildings along the river edge are quite eclectic, clad in timber, composites, tile and metals.  Whilst Baca wanted the house to have a contemporary vernacular form, they decided to capture the spirit of the local aesthetic with a metal shingle. This alludes to both the tile and the metal cladding precedents of nearby buildings, whilst being of unique character itself. Zinc is also commonly used in boatbuilding, often used to provide corrosion resistance.

“The longevity is fantastic”, says Barker. “Zinc is one of the longest lasting metals and a lot cheaper than lead. It’s a very thin, light material that provides the weather resistance and gives you the longevity, so that you can leave it pretty much to its own devices for 25 years.”

There is no vehicular access to the site, which affected how the project was both designed and constructed. Whilst there was an existing barge service, reliance on the boatmen would have been a risk, so the contractor set up a chain ferry to transport materials across to the island.

The river wasn’t deep enough to carry large prefabricated elements; so much of the building was built on site. The architect instead opted for smaller elements to meet the maximum weight requirements for the ferry, including the 2000 zinc shingles which cover the roof and walls.

The NedZink NOVA shingles were prefabricated by the roofing contractor Kingsley Specialist Roofing and are square, approximately a foot in length on each side. They are installed at a 45-degree angle, which produces diagonal lines across the façade, architectural and slightly animalistic. “A great thing about the shingles is that if one of them gets damaged they can be replaced individually,” Barker adds. 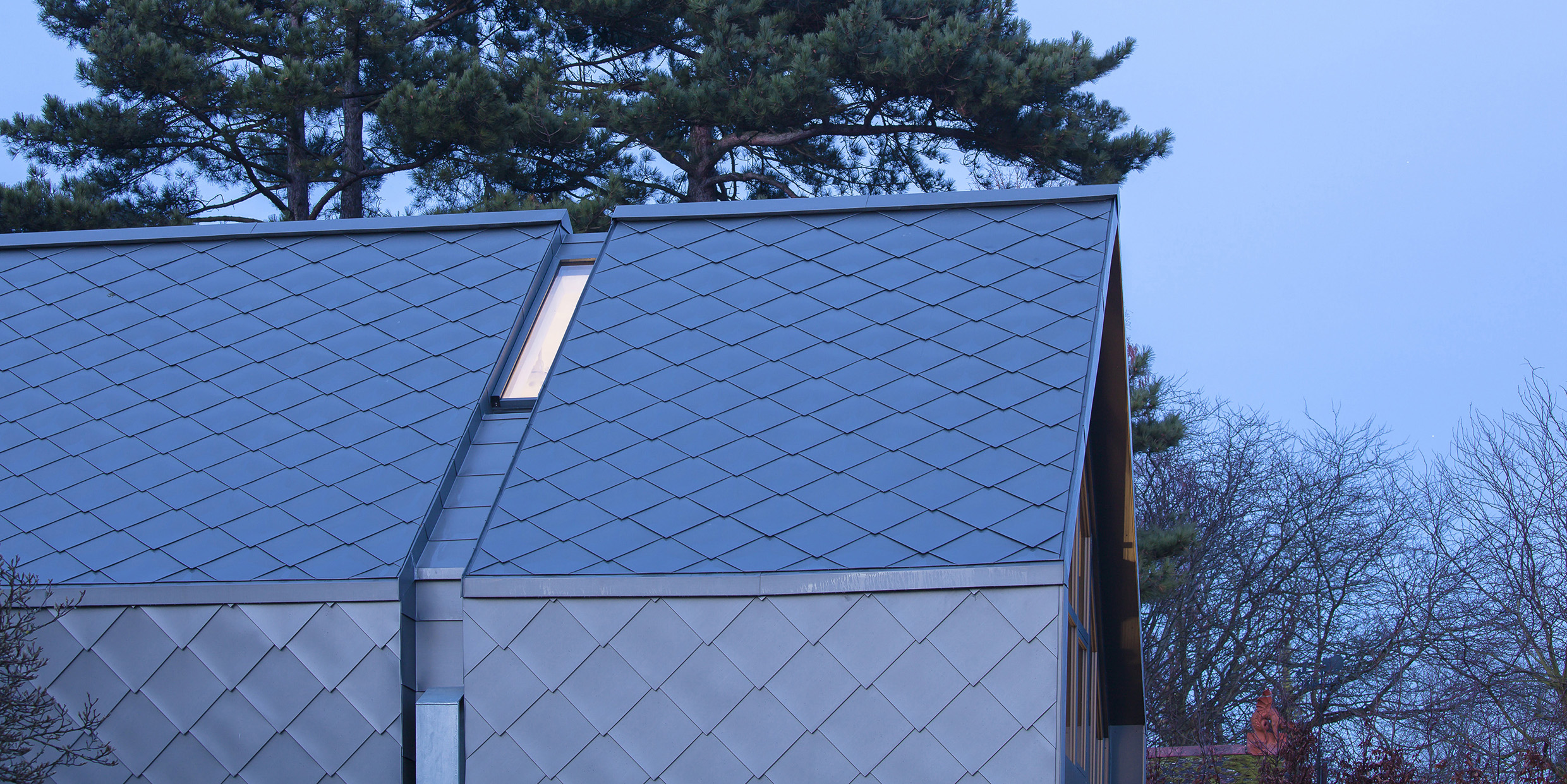 Baca looked at several different options for zinc including different patinas and colours. At one point they considered a red-pigmented zinc, which features in earlier illustrations of the project, but decided they preferred a natural patina finish. Of the pre-patinated alternatives on the market, Barker chose NedZink because it is a “very honest, natural coloured material”.

The technical support offer that SIG Zinc and Copper provide also influenced Baca Architect’s decision to choose NedZink for the cladding. Barker found the team at SIG Zinc and Copper “very easy to work with and very helpful” in terms of resolving some of the complicated geometry and detailing, and they are working with the team on other projects.

Large areas of flat zinc sheeting are relatively easy to do, Barker says, it’s the junctions and edging that are difficult:
“The challenge was around the dolphins and roof lights where the dolphins are tracked up over the roof. Ventilation is very important with zinc, so we have designed a continuous ventilation line under the line of zinc. Where we have the rebate to carry the line of the dolphins over, which we really wanted as a feature, we had to design it so the ventilation can track underneath that and over the top of it, and at the same time fit our roof lights over it, which is quite complicated. [SIG Zinc and Copper] did a cracking job of it actually, they did a very good job.”

A set of zinc box panels was prefabricated to slot into place behind the dolphins, creating a very clean finish. At the eaves, Baca originally intended to produce recessed gutters, but as surface water runs off into the river, there’s no need for guttering. Instead the team developed a clean edge detail to create a smooth transition from wall to roof, emphasising the homogeneity of the zinc surface. 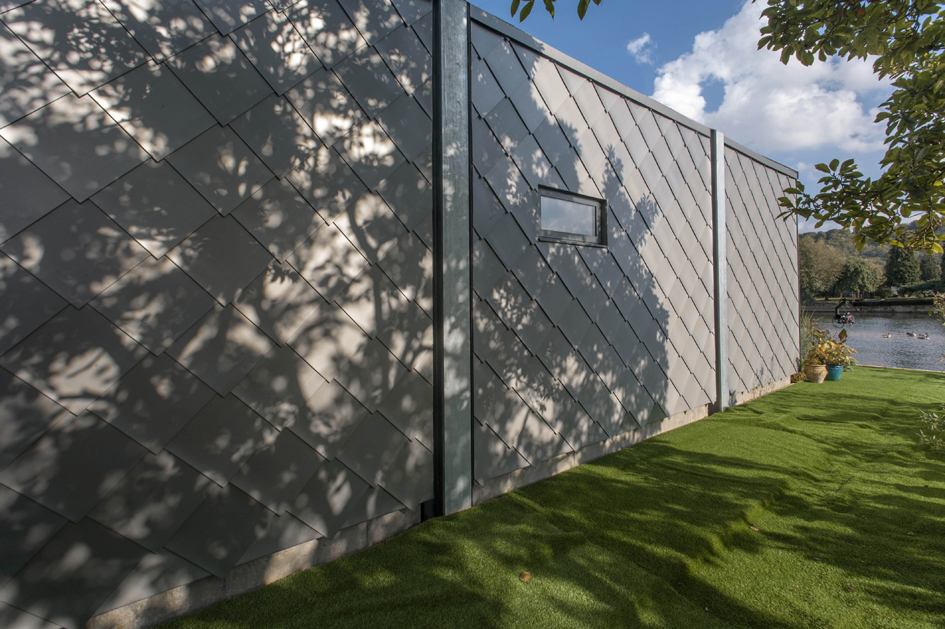 Installation of the Zinc Shingles

We had worked through most of the details on paper already, and then on site we discussed them and did a mock up for the client. The next time we came to visit, bar a couple of queries about how the servicing would penetrate the cladding, everything else had worked very well.

Barker is in favour of good communication with the team on site.

“We find that you can work things out as best you can on paper and CAD initially, but it’s always good to be on site with the installer for a quick chat about what you’re trying to achieve.”

Working together with SIG Zinc and Copper and Kingsley Specialist Roofing, Barker was able to draw on the team’s expertise to achieve the finish he wanted. The team ensured the overhang at the full height glass façade was completed to his satisfaction, and produced an improved detail for better waterproofing at the ridge.

Now the project is complete, Baca are very pleased with the outcome.

‘I think it’s fantastic. It does capture exactly what we were trying to achieve. There’s a tree to the neighbours property to the west that casts a beautiful shadow in the afternoon. You get a natural flex with any metal, but with the shingle this is controlled, which gives a wonderful undulation. We’re looking forward to seeing when a substantial flood comes and the building is surrounded by water. I think the building will look amazing.”

Robert Barker is keen for architects to engage with the supplier early to talk through the details, because they can bring a lot to the table.

“As an architect, you might not necessarily commit to one company or another, but the benefit of working with the supplier even once you’ve got a contractor on board, comes true in the final product. We want suppliers to provide the warrantees, but architects will often have their own view about how they want it to look in detail, so you must work closely with suppliers to make sure you get that balance right.”

Barker is now an advocate for zinc on waterside projects. It makes sense from an historic, a practical and an aesthetic point of view.

“We are very keen to use zinc again in amphibious buildings, it’s a perfect material for riverside settings.”

SIG Design & Technology has put together an 8-step guide to identify the challenges and ensure that a roof’s design meets a building’s requirements. Called “#Perfect Roof”, the eight steps follow the process from product selection and design expertise through to full guarantees and planned maintenance. This know-how is just part of the service that is provided free to customers.